Murder of Cpl. Matthew Edwards: In the Line of Duty

This episode is a story of heroism. It illustrates how quickly an unsuspecting police call for service can turn deadly. This is the story of Corporal Matthew Edwards’s murder in the line of duty, and how his family used the pain of his murder to show how love and forgiveness can overcome hate.

Lieutenant Stephen P. Williams, killed in the line of duty on June 2, 2020; he was one of the first members of Humanizing the Badge (Image Source)

Humanizing the Badge is an organization on a mission to help forge stronger relationships between law enforcement officers and the communities they serve.

The #CallForBackup Suicide Awareness and Prevention Campaign is built upon the principle that peers are best suited to help one another.

The Project Human Podcast is hosted by Chaplain Edwards and highlights the humanity in the experiences of first responders.

Friends at Behind the Wall make a sign for Cpl. Edwards’s memorial (Image Source)

Letter from an Officer’s Wife

I want you to know that I see you.  I see you choose the booth in the restaurant that allows you to have your back against the wall.  I see you walking to your next traffic stop while you hope that it isn’t your last.  I see you pulled over, two hours past your shift, as you finish your reports under a street light.  I see you as you direct traffic in the scorching heat, the gusting snow, and the downpour of rain………..

Please visit Humanizing the Badge to read this powerful letter written by Elizabeth Ogden in its entirety, in memory of Officer Ramos and Officer Liu of the New York Police Department.

Lessons in Losing a Brother

News of an officer involved shooting cut through the rest of the morning talk-radio chatter on the drive to work.  Most of the other officers at the department had also heard the news, but the disposition was unknown.  We all hoped for the best of course, but sharing a common in-car messaging system, several unanswered messages began to increase concern. Eventually, a voice on the other end of the phone from the Taylor Police Department (Taylor, MI) confirmed that in an early morning situation, an Officer had been killed in the line of duty……….

Lessons in Losing a Brother was written by Mike the Cop – Matthew’s brother. He wrote it to share his thoughts and feelings with others who have suffered similar losses. The full article can be found on the website Humanizing the Badge.

This episode is a story of heroism. It illustrates how quickly an unsuspecting police call for service can turn deadly. This is the story of Corporal Matthew Edwards’s murder in the line of duty, and how his family used the pain of his murder to show how love and forgiveness can overcome hate.

On July 23, 2010, Corporal Matthew Edwards was dispatched to a call with Corporal Gregory Piche which was initially believed to be a burglary in progress. Upon arrival, they confronted a man that matched the description of the suspect. During this encounter, the suspect committed the senseless in the line of duty murder of Corporal Edwards by repeatedly shooting him. This story walks the listener through the events of how the Edwards family learned that their loved one was murdered through the trial of the suspect.

This event caused tremendous pain to the Edwards family.  His brother Michael Edwards was also a police officer. This incident led to Mike Edwards (also known as ‘Mike the Cop’ in social media) to start a group with Elizabeth Ogden, the wife of an Amarillo Police Officer, called “Humanizing the Badge” to help bring officers and the communities they serve closer together. Chaplain Edwards later joined the management team. They also helped start a group called “Call for Backup” which teaches first responders about suicide awareness and prevention. Humanizing the Badge impacts officers and their communities throughout the United States and around the world with hundreds of thousands of social media followers. Their efforts after this tragic in the line of duty murder show how love and forgiveness will always overcome hate.

Sources used to research this case

More from this show 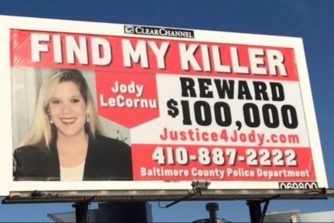 This true crime story highlights the enduring love of a sister and her quest to find the killer who took her twin from her.  In 1996, Jody LeCornu was just 23 when she...

Murder of Michael Carmen: The Birth of Crime Stoppers

Michael Carmen was just 20 years old when he offered to work an extra shift at a gas station for another employee. He was in college and two-weeks away from getting married. When Michael...

Murder of Cpl. Matthew Edwards: In the Line of Duty
We use cookies to ensure that we give you the best experience on our website. By using this site, you consent to the use of cookies as described in our Privacy Policy.OkPrivacy policy